You’ve got to give credit where credit is due – the Swiss know how to do things right.  I got off the plane and a young man was right there to greet me. He let me know that I could do one of two things – turn left and go to the shops and restaurants or turn right and stay at the Swiss Lounge.  My flight to Johannesburg doesn’t leave until 10pm – so I sauntered off to the Swiss Lounge.  For $50 I got my own private room with sink and flat screen TV and showers down the hall.  It’s neat, immaculate and very spa-like.

This may possibly be the best $50 I’ll spend for a while. I’ll do a little computer work, watch a little TV, then snooze until 8:00pm when I’ll get my wake up call. Finally,  I’ll head to the shops and restaurants for a little window shopping and a bite to eat.  Next stop…Johannesburg! 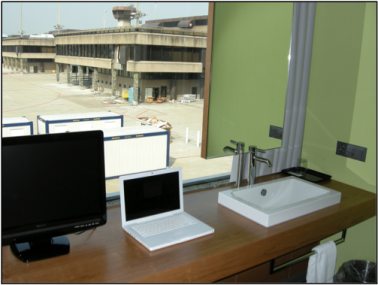 We were late getting into Johannesburg and due to a series of “one thing after another” took too much time and I missed my flight to Livingstone, Zambia.  A tragedy?  No. By this time, I was dirty and tired. For some reason, I had not been able to sleep on the last flight — which became a 10-hour movie marathon. Oh, I also played a record number of “Who Wants to be a Millionaire? But sleep — not a wink.

This was my first test of whether or not all the electronic stuff I brought with me would see me through the normal travel glitches.  Some did – some didn’t.  I found an internet café where I bought myself 30 minutes of time on the internet.  I emailed my contact in the UK who then called the folks in Zambia to tell them that I would not be there today, but would arrive at the same time tomorrow.  That’s the short version.

The real version took hours!  The new international @#$%^& phone wouldn’t work — my first couple of attempts to FIND internet access failed.  Once the phone worked — no one answered my first three calls. Ramp up hot and tired to a whole new level — add cranky and that was me two hours later.

As noted earlier – everything worked out fine and I went on to spend a wonderfully relaxing afternoon and evening at the Southern Sun Hotel – which I highly recommend to travelers spending a quick overnight in Johannesburg close to the airport.

Woke up the next morning — got on the plane – landed in Livingstone, Zambia at 12:30 pm Tuesday.  I am back on track, folks! This is where I’ll spend the first month of my travels – volunteering at Lion Encounter.