Located between (Livingstone) Zambia and (Victoria Falls) Zimbabwe, Victoria Falls is the largest waterfall in the world – so it should go without saying it is an ideal place to fall 111 meters with a cord attached to your ankles. 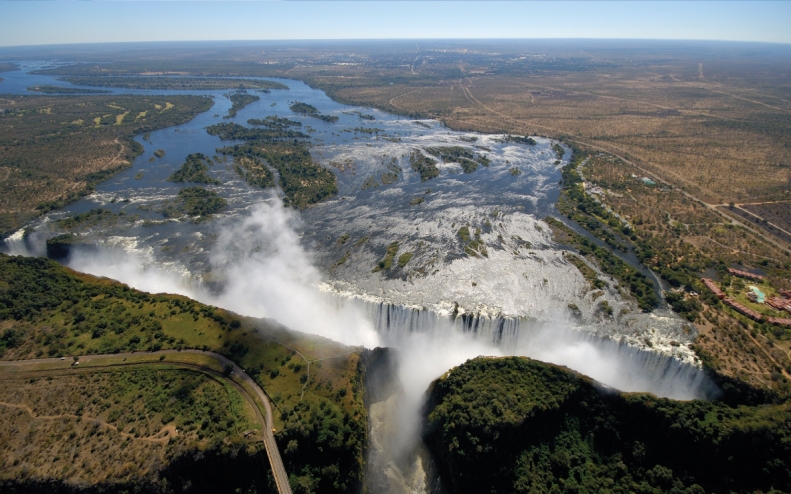 David Livingston, the Scottish missionary and explorer, is believed to have been the first European to view Victoria Falls (named for Queen Victoria) on 16 November 1855 from what is now known as Livingstone Island, one of two land masses in the middle of the river, immediately upstream from the falls on the Zambian side.

Thursday, April 9, 2009 As if walking with the lions was not cool enough – today I was going to bungee jump! The decision to jump came about on my first night at Lion Encounter. It was Nicole’s birthday so we all went to dinner together at Rhapsody’s, a local restaurant in downtown Livingston. Who knows how these things happen… One person mentions that it would be cool to bungee jump in Africa and as happens when you’re getting to know new people and feeling conversational, you agree and reply “that would be fun – I’ve always wanted to bungee jump.”

Typically, you make a comment like that and nothing dangerous comes of it. But I’m in Africa. Not 10 seconds after I’d made that stupid comment, Ben announced that we could bungee jump over the Zambezi River on Thursday. Not “next week” or “some time while you’re here” TWO days from NOW – Thursday. Well how about them apples — big mouth. I really could kick myself sometimes.

The jumping platform is right at the midpoint of the Victoria Falls Bridge which is located in the no-man’s land between Zambia and Zimbabwe. Yep, I’m going to bungee jump. 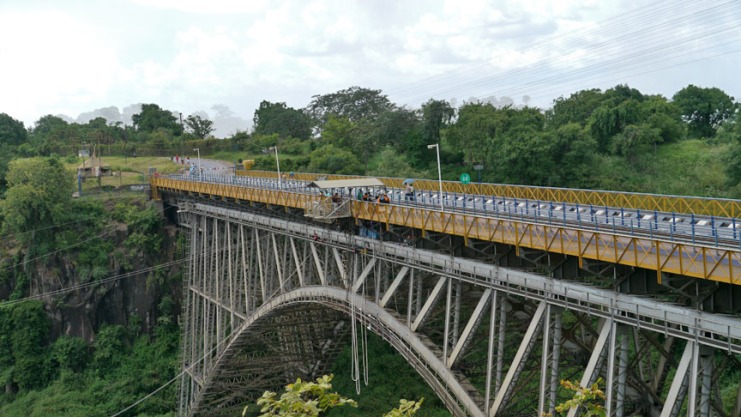 My roommate Maya was one of the three of us jumping the other was Alex. Vickie came with – to cheer us on you know – she’s already declared that she’s not this stupid – but she’ll take pictures of us 🙂

So here I sit looking down 111 meters to the rushing waters of the Zambezi River – all because I couldn’t keep my mouth shut after one glass of wine. 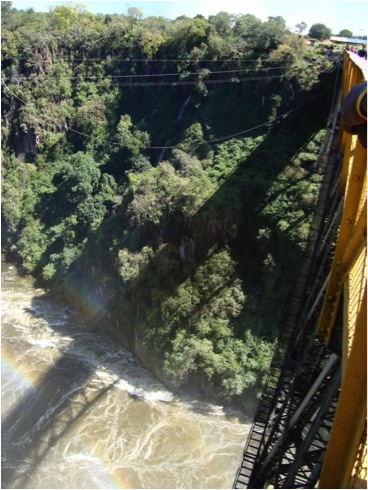 It’s all shits and giggles till someone gets hurt…

So, you’re strapped in and they ask you to stand and assume the position on the plank. It’s a piece of wood that sticks out over the edge of the bridge about 2 feet. It’s at this point that everything became very real and very scary. I peered over the edge and at that moment – nobody else existed except me. I couldn’t hear the spectators or Vicki yelling for me to look at her for a picture. I could hear my heartbeat pounding. My breath caught in my throat for a moment and my mind was denying what I was about to ask my body to do. Then slowly, I could hear people around me yelling encouraging comments – I saw Vicki with the camera – I looked at the rushing water and then I heard the countdown. All I could think at that exact moment was – if I die – at least it will be quick. Just do it. The handler grabbed the back of my harness and said very quietly 5, 4, 3, 2, 1 and then he pushed me off the ledge.

I remember every single second of that fall. It is firmly etched in my brain for all eternity. My arms were spread out – my eyes were wide open – I was face down and watching the churning waters of the Zambezi river rush up to meet me. I chanted the whole way down (pardon me Mom) “Oh my f #$%^&* ing God!” over and over and over again. Then the cord caught – my decent slowed and I came to a stop. Time stood still for a brief moment – then I was jerked back up. Every drop of blood in my body rushed to the top of my head along with the contents of my stomach. Then back down and back up again. And back up and back down I went several more times, each time for a shorter interval of time and distance.

A nice young man appeared on my right side attached to a cord of his own. He smiled at me and asked it I’d enjoyed my ride. As I was still hanging upside down and by now the blood rush to my head had caused my vision to blur a bit – I simply turned my head in the general direction of the voice and yelled “That was awesome!” He’s happy – he’s pulling me upward – I’m happy – I’m not dead.  And there we go – I’ve bungee jumped. My stomach rebelled for another 30 minutes or so, but other than that, no lasting side effects from bungee jumping. This is officially crossed off of the “stupid things I want to do before I die” list.

Next we crossed back over to Zambia and entered the Victoria Falls Park. 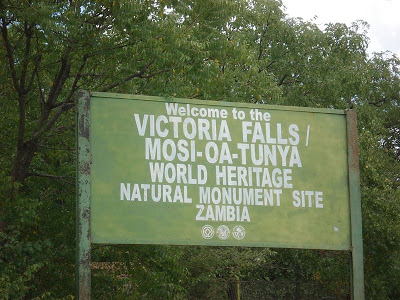 As I wrote before, the water is extremely high this season. There is so much water coming over these falls there really is no dry place to see them. It’s actually very difficult to see them – the spray is so strong. The picture of me in the slicker is the last time I was even remotely dry. 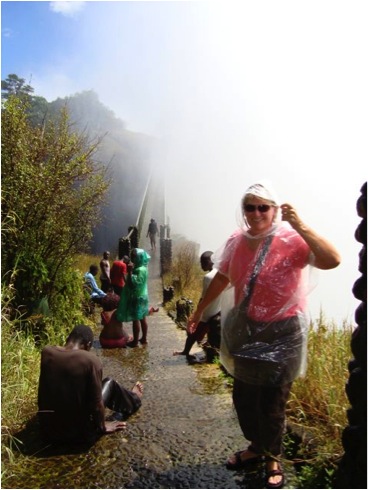 The bridge in the background crosses over the river and we’re going over it. You have to be careful that you’re not accidentally knocked over the side by the power of the spray. I know – you’re thinking – it’s spray – how strong can it be?  HAH! Not only were we blinded as we tried to cross – but it was slippery as heck! It was like walking through a class 4 hurricane! We were lashed by the wind and the water! I was holding onto the rope handles for dear life thinking for the 4th time since coming to Africa (less than a week ago) THIS IS NOT HOW I’M GOING DIE !!!!!

Note the WHITECAPS on the bridge…

The two guys are Andreas and Oivert, (research workers from Norway) both of whom are staying at the house with us. 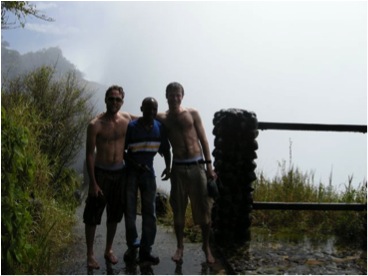 We made it back to camp alive and well and in time to go for our afternoon walk with the lions!