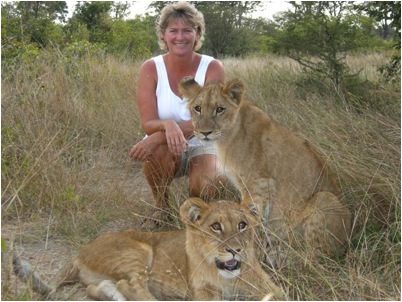 When I arrived at Lion Encounter in Livingstone, Zambia on Tuesday, April 7th I’m not sure what I expected.  I knew that I would see lions – but have a truly hands on experience – walk and actually play with them – not in a million years! And friendships? I thought that volunteers would float in and out of my daily life and the staff would be great, but too busy to really spend time with us. Wrong again. It’s hard to express what a truly phenomenal experience this has been and how sad I am that it’s coming to an end. But that feeling is mixed with a little excitement for the next part of my journey as well.

I’ve actually changed my next set of plans a bit.  I was supposed to spend a full month with the meercat project, but I decided I needed a little time to wind down after Lion Encounter – time to reflect on the past month, look at pictures and clear my head to get ready for the next big adventure. So, I’ve booked one week in Cape Town, leaving 3 weeks with the meercats.

Looking back, the first two weeks were so overwhelming – getting to know both people and lions – it was hard to stop and smell the flowers. You’re trying to remember all the cubs names as well as the volunteers, staff, lion handlers, guides, scouts etc. Each lion has their own their own personality – quirks and habits. It took some time, but they soon became unique individuals to me instead of a mass of claws and teeth with the potential to hurt me. I’ve learned and seen how incredibly loving, patient and tolerant they are with us and with each other.  And I can’t seem to ever stop photographing them.  I will miss all of them.

I guess comfortable is an appropriate term to use for my second two weeks at Lion Encounter.  I became familiar with the night sounds of birds, and monkeys, hippos and elephants, all moving through the bushes and calling out to one another throughout the night.  What kept me awake the first few nights, became comforting background sounds that put me right to sleep at night.

I became familiar with all the various smells of the bush and of being around 10 lions and over 10 people in very close quarters with each other all day, every day.   The cubs have very distinctive smells depending on the day as I think I’ve mentioned before.  The day before they’re fed, they’re lovely sweet smelling little cubs.  The day after they’ve been fed – OMG – RANK

Whatever their bodies don’t need – has come right out the other end and it’s more stinky then it was when it went in.

The day after feeding is always a good day to walk with clients. Okay, this is a bit mean…but my God is it funny to see the look on their faces when the wind catches a cub just the right way is priceless after they’ve farted.  The client will  try to hide it – the look you get on your face when you smell something rancid – but it usually catches them unaware and and they can’t quite hide the quick horrified look that spreads across their faces as they try to reconcile these cute little lions cubs with the atrocious smells coming from them.  It’s pretty hysterical.  You all think dog farts are bad — petunia’s in comparison.

Walking through the bush, you smell dung from every animal in the park – hippo dung, elephant dung, waterbuck dung – you get the picture. You get used to the various smells.  Some dung can be used for contests – one of which is the ever popular impala poop spitting contest.  The rules are simple – just place an impala poop in your mouth – pucker up and blow.  Further distances are achieved if you can effectively wrap your tongue around it to give it extra uumph.

And before you think it — I declined to play.

The cubs LOVE to roll around in everyone else’s dung.  Now Ben tells us that they do this to cover themselves with the scent of a potential prey, but frankly it looks like they just enjoy it.  They roll around with glee and eat it too!  I think that’s taking the business of scent cover to an extreme degree. This is all elephant dung…

The river has it’s own smell as well.  It’s been very muddy lately because of the heavy rain season and sometimes it smells a little like a swamp – if the wind is right. But other times it smells like fresh rain – that’s if you’re standing upwind of all the hippo, elephant and buffalo poop.

But the bush also smells like the wild lavender that grows everywhere.  We would pull the buds from the lavender stems and rub it into our hands to make them smell nice.  Maya and I pulled enough one morning to make a bowl of potpourri for our room.  All these smells have become familiar and comfortable and a part of the bush where  I spend most of my days.

I’ve even gotten used to riding in the back of a pick up truck.  Now here is an example of a lawsuit just waiting to happen – if this all took place in the US.  But things that just wouldn’t happen at home are commonplace in Africa.  The company owns a few Toyota open bed trucks.  Some seat two people – some seat four – but all have a bed in the back that will fit up to 16 people.  I know this because I’ve been in the back of the truck with 15 other adults – all squished in together. 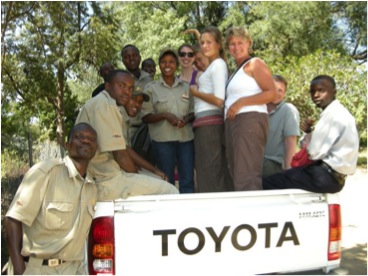 The lucky ones get a small space on the actual floor of the truck – latecomers take seats on the side and hold on for dear life!  So there I am – one of my first days at Lion Encounter  – and late for my first trip to town – so I find myself relegated to the side of the truck bed with my rear end hanging over the edge and both hands grasped to the sides in a claw-like death grip.  The road from our house to the main road is a dirt path that hasn’t been raised/smoothed over since Mandela last visited (I’m not sure if he ever did).  The bumps, holes and craters in that road put a bad winter of potholes in Erie to shame!  If you manage to stay in the truck for that part of the drive – you’re 50% there – then you have the road to town to survive.  This part of the drive was more dangerous – at least on the dirt road, the driver had to slow down to manuever through the craters and I always felt that I would survive the fall if I did indeed fall off.  You see, the road to town is paved, encouraging speed.

The truck turns onto the main road – a two lane paved highway with no speed limit posted.  I’m holding on tightly – my sunglasses are firmly in place to deflect bugs – I’ve balanced my weight appropriately and am feeling fairly confident that I’ll live through this. Half a mile down the road and I peer into the truck cab to look at the speedometer.  We’re going about 120 kilometers – 75 miles per hour – and going faster every second.

So here is a picture of me at this time – my sunglasses are suction cupped to my face and my cheeks are flapping like I’m on a roller coaster – my shirt has whipped up around my neck but removing a hand from the side of the truck to pull the shirt down is not an option because they don’t have seat belts on the back of trucks – holy crap we are going fast! There is always a moment during times like these – like the bungee jump – when you turn introspective and fatalistic in your thinking – one swerve of this truck right now and I’m roadkill. I guess if today’s my day then today’s my day. But let’s cross our fingers that doesn’t happen.

By the end of the ride every hair on my head was standing straight up and slightly tilted back. I had to peel the sunglasses off my cheeks and I my shirt had stretched out another two sizes – but I was still attached to the truck and not dead.   Seven more town trips to go!

I think that I’ve mentioned that I’m the only American here.  My compatriots are mostly from the UK with a scattering of other countries being represented by some fine folk!  Norway has been well represented by Maya, Oyvind and Andreas.  The UK is represented by Suzanne, Hayley, Ben, Alex and volunteer Ben plus most of the staff.  The newest member to join the volunteer club is August and he’s from Iceland. We’ve all learned new words – it’s sort of a game that we play while we’re sitting with the cubs – somewhere in the shade.  Maya always has a list of american words she wants to know the meaning of and how to use them.  Interestingly, we don’t always agree…but that makes the conversations even better. 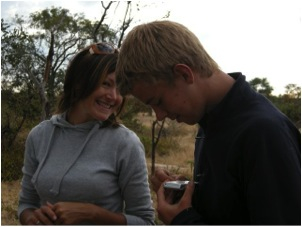 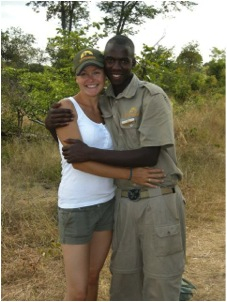 I’ve decided that I like some British words better than American words like knickers instead of underwear and brilliant instead of cool – and saying cheers instead of thank you just makes me smile.  At times, we’ll all try to speak like each other – those with european accents will attempt to remove it – but trying to sound american makes them sound bland – whereas me trying to sound british is just comedic. But when around a lot of brits you do pick up words and phrases  — I’ve been using “bloody” a bloody lot.

I’ll bet that you didn’t know that the British call a “fanny pack” a “butt pack.”  I had been going out on short walks with my fanny pack instead of the larger backpack for weeks before I was finally informed that the word “fanny” in brit speak means the front part of a woman’s lower anatomy.  I explained rather slowly to them “No, your fanny is your butt”.  My grandmother used the word fanny.  No, they replied equally slowly  “we call your front part the fanny”  This bothered me enough that I put the fanny pack away for good and began wearing the backpack.  Damn brits.

After a month here, I automatically get into the left side of a car and I pass people on the right. Within the first week or so, I knew the names of all the lion handlers, guides and scouts and now I also know how many kids they have and when the next wedding will be – Lovewell on June 1st!  They’ve become my friends and that means a lot to me.

I notice that I don’t care anymore that I can’t get the last of the dirt off of my feet at the end of the day no matter how hard I scrub.  Bugs don’t bother me very much  anymore either. Now don’t get me wrong – spiders will still put me on a chair – but in general – having a bug crawl across the dinner table generates a very blasé response.

We sing this song every time someone leaves “So long, farewell, auf wiedersehen adieu – adieu, adieu to you and you and you!” So long Lion Encounter – I hope that it won’t be too many years before I’m back for another visit – and thank you to everyone who made this encounter such a special one for me!