I left Africa with mixed feelings.  This is the second time that I’ve been to the continent. The first was in 2000 when my Aunt Barbara and I went on safari in Kenya followed by a river boat cruise up the Nile.  It was a spectacular trip and one that I treasure and remember as clearly as if it happened yesterday.  I loved Africa then and I love it still.  I know that not every inch of Africa is loveable…but the places that I’ve been to and the people that I’ve met have been and I leave this beautiful place again with regret and with an overwhelming feeling in my heart that I will be back again soon.    Farewell Africa…until we meet again.

And so I continue my journey and as before, I planned to spend a few days getting myself sorted out and to relax a bit before my next big adventure which is India.  This sorting out would take place in Dubai and what a sorting out it was!

Obviously, I did not take these pictures 🙂

“35 years ago…Dubai was a bedouin desert town filed with traders, fisherman and pearl divers.  Dubai today…an emerging international power house.  A boom town rushing to become the biggest and the best.  No idea too big or too ambitious”.

These are the words of my morning man, Matt Lauer, from the Today Show.  He was in Dubai just last year. There is something wonderful about pulling into a 5-star hotel in a pair of shorts and a t-shirt that needs washed and being welcomed with open arms and a warm greeting.  I am so happy to be here…

I arrived early (6:30am) and was told that my room wouldn’t be ready until 11am.  My Mom had sent me a box of “stuff” from the states and it had arrived and was waiting for me at the nearest local post office.

So, my “stuff”. Before I left home, I had packed up replacement supplies to be delivered during my trip at strategic times. I knew that I wouldn’t be able to buy my face cream, lotion, soap, vitamins, and so many other things that were “must have’s” on the trip. So I purchased them in advance and boxed them up in batches complete with postage so all Mom had to do was drop them off at the post office at the right time and voila…I’m all re-stocked! First box of “stuff” delivered and soon to be picked up. I handed over all my bags and jumped in a taxi – destinations – post office and the closest mall!  Put the petal to the metal driver – I’ve got errands to run and this girl is almost out of toothpaste!!

After spending two hours inside a mall – and feeling rejuvenated from a little shopping – I returned to The Meridien around 1:30 and hit the pool. Sometimes, you just need a good book, a cocktail and some sunscreen to make your day perfect and complete.

Yes, that’s my chair – my happy space for a few hours today 🙂 Afterwards, I was good and went for a workout and then unpacked in my room – got my laptop all settled in for the week and began to plan my days. My Aunt Barbara is an adventurous traveler herself and she just recently returned from Dubai.  She was able to make some suggestions that made my stay in Dubai even better! She also sent me some money to help with the ridiculously expensive activities I was about to embark on — Thank you Aunt Barb!!! 🙂

My first experience was the Desert Safari.  A Toyota something or other picked us up in front of the hotel and I jumped in with 5 other people – a couple from Japan who were going to Sri Lanka to meet the husbands family and three men from Germany who were in Dubai for a technical/engneering conference. We drove about 50 minutes out to the desert then pulled off the road and into the sand where our driver released 50% of the air from all four tires.

After the first “slide” down a sand dune, I asked our driver if he’d ever tipped over? He smiled at me and said “No, no, no…of course not”  I don’t  believe him.  But the truck comes with a roll bar so I just sat back, switched the camera to video and enjoyed the ride!

Axel and I stopped to get pictures with the falcons.

This is a camel farm in the middle of nowhere…

Just so you know, I watched all my video before putting something on here and it made me car sick — therefore I’m just putting a little bit on so you get the gist of it.  This experience is one of those “you had to be there” to get the full effect.  You can’t really tell how much we were sliding down the sand dunes — and that was the most fun! 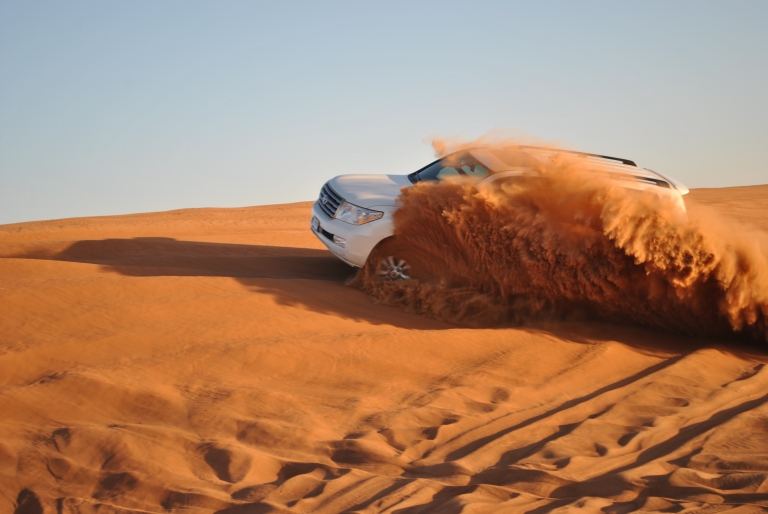 After the dune buggy riding was over, we went to the bedouin camp site for dinner.

There is always the opportunity to shop…

The after dinner show was a snake lady followed by a belly dancer.  Somehow, we convinced Axel get up on the stage with her and belly dance himself! He’ll never leave his day job – and we laughed! I couldn’t get a picture of him that wasn’t blurred – so I’ve settled on the lady with the snake…

As I’ve said before, it’s the people who make this journey memorable and this was no exception!  Because I’m traveling alone, I’m always meeting people and really getting to know them. This enhances every experience I have and takes everything to the highest level of awesome!!!.

Next activity — flight! Seeing Dubai from the air gives one a totally different perspective on the city.  It’s crazy to see these buildings all clustered together – with various lakes – all surrounded by an endless desert. So I went up in a seaplane to see the sights from above.  As you’ll notice, the heat created a significant haze over the city and while the pictures and video aren’t that great…I was still able to see everything that I wanted to see.

The Burj Dubai – tallest man-made structure in the world. The cover photo of this blog page is a much better photo. It was very hazy today so my pictures aren’t as clear.

The Burj Dubai is actually a section of the city all it’s own.  ‘The gigantic tower is located at the core of an integrated township called, Downtown Burj Dubai, which features several more developments apart from the main tower.  All these developments will produce over 30,000 homes, including villas, luxury residential suits and serviced apartments; nine hotels such as Burj Dubai Lake Hotel and the world’s largest mall, The Dubai Mall as well as an eco-friendly landscape carrying the man-made Burj-Dubai Lake”.

Nothing like having your own lake in the middle of a city! Just one of the many interesting facts about this building – their elevators will be the longest in the world from lowest to highest point and will travel at 40mph!  That’s practically a rollercoaster ride!

This is the Burj Al Arab – designed to resemble the graceful sails of a billowing arabian dhow and the world’s first 7-star hotel.  It’s 321 meters high making it the worlds tallest hotel building, taller than the Eiffel Tower and just 60 meters short of the Empire State Building.

And a better pictures of this beautiful building..

The small rectangular box on the right – is the Skyview Restaurant where  I’ll be having dinner tonight! 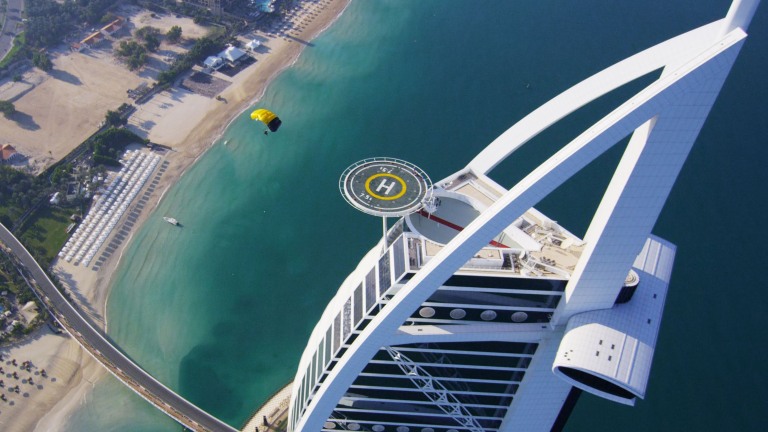 Are you wondering what takes place on the circle marked with an “H”? 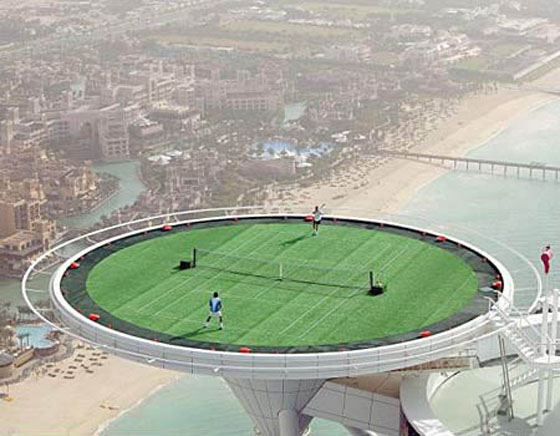 Inside the Burj Al Arab… 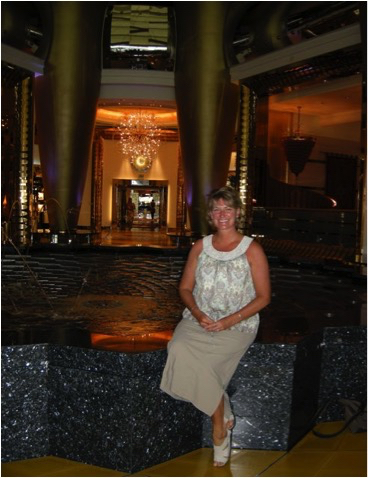 Interestingly, this hotel is officially rated a 5-star Deluxe hotel. It’s the press that has dubbed it the “World’s First 7-Star Hotel” There is no such standard level.

But it is elaborate…

This is looking up at the floors. 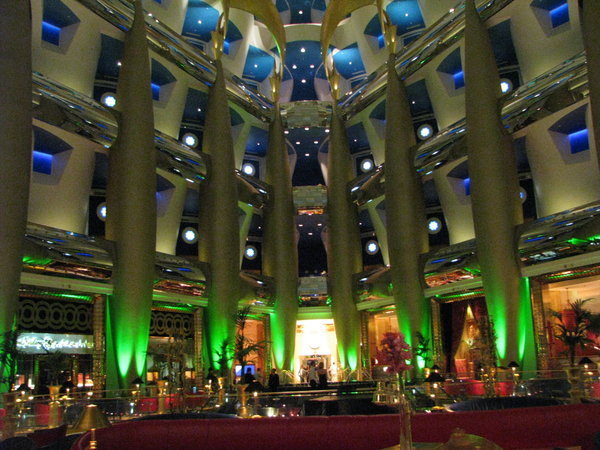 I didn’t take this picture —

–looking down to the lobby

The tri-color area is the fountain in the lobby

And this is the actual fountain

Looking up – they have the world’s tallest atrium – over 180 meters high – and they’ve used 1600 meters of 24-carat gold leaf on the interior.

This was the menu. 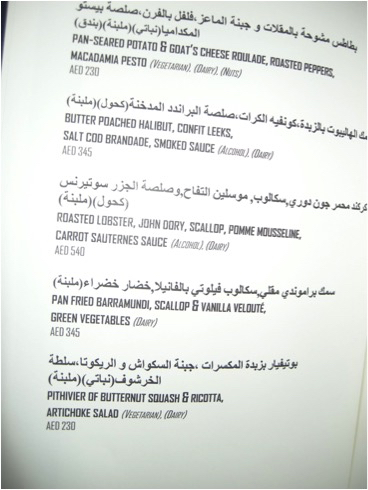 I had the first item – the Pan-Seared Potato & Goat’s Cheese Roulade, Roasted Peppers and Macadamia Pesto.  It was delicious!  The price for that item was AED230 or $63.  It was an a la carte menu and the total added up pretty quickly.  One glass of wine, one bottle of water, dinner (below) and desert came to a grand total of AED 530 or $160.

While expensive, it was a world class meal and I enjoyed every single bite of it!