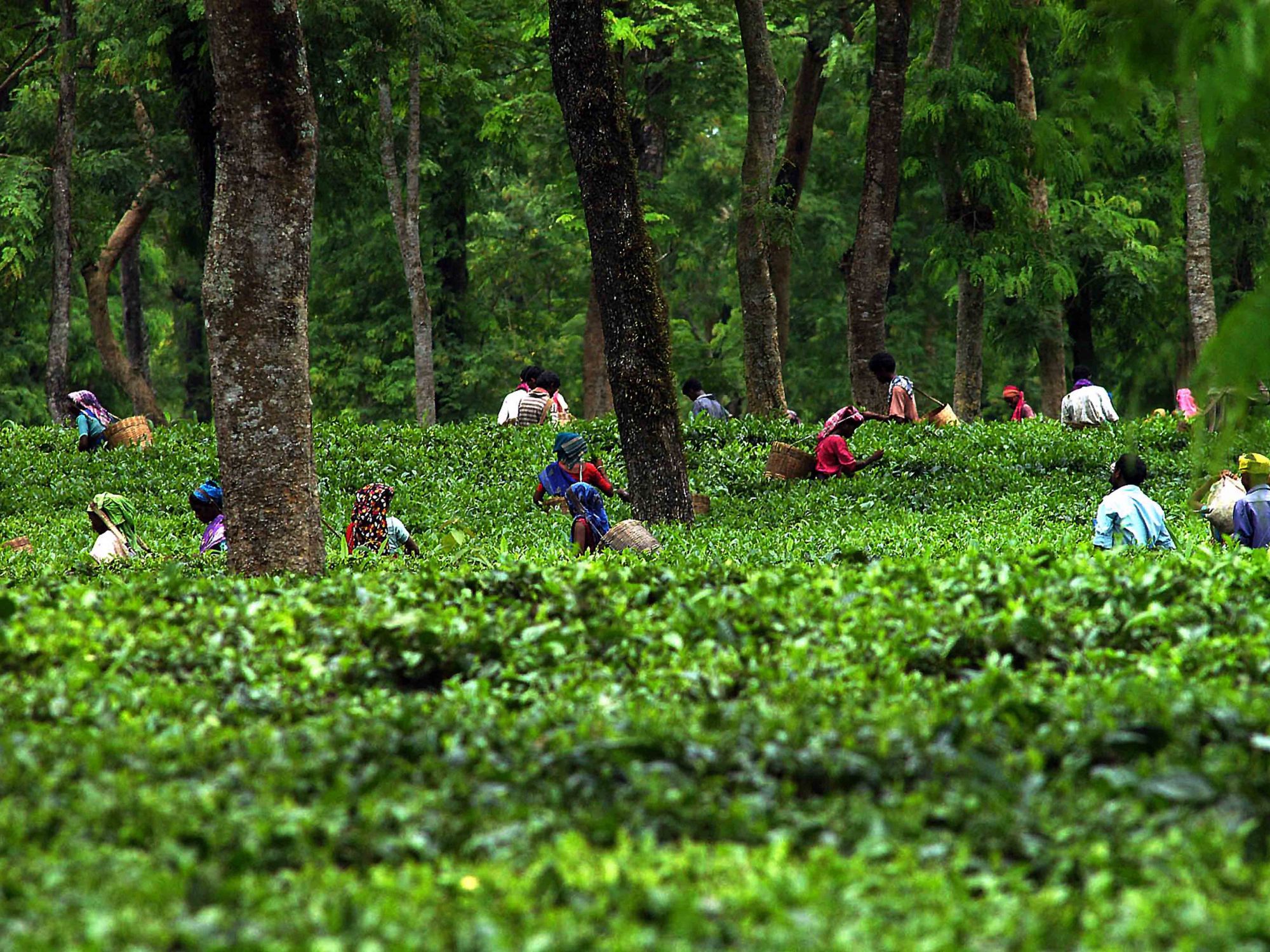 After the heat, dust and noise of Mumbai and Madurai, the mountains have been a cool and refreshing treat!  On Saturday, Baskar and I left the Spice Village and continued further into the mountains that provide the perfect environment for growing tea.

I had done a little research on Kerala before coming here and these were just a few of the things I read about this area…National Geographic Traveler declared Kerala as “ one of the ten paradises of the world”.  The state is also known for other achievements such as having a 91% literacy rate…and ranking as the least corrupt state in the country!  56% of Kerala residents are Hindu’s, 24% are Muslims, 19% are Christians and the remaining 1% follow other religions including Sikhism, Jainism, Buddhism and Judaism.

While fishing, agriculture and tourism support the Kerala economy, the region continues to be dependent on emigrants working in foreign countries such as Dubai or Bahrain and their remittances, which annually contribute more than a fifth of their gross state domestic product.

Whether you’re in the mountains, or down by the sea, the climate is tropical.  They get rain between 120 and 140 days per year.  This puts the chances of me seeing the sun over the next two weeks at slim to none. 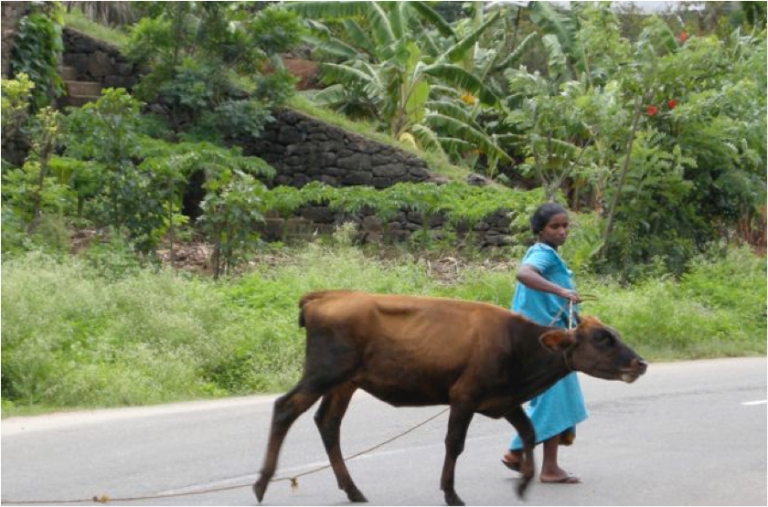 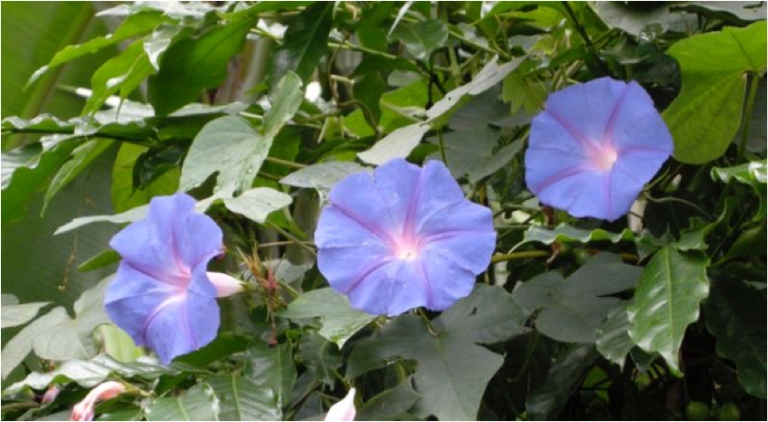 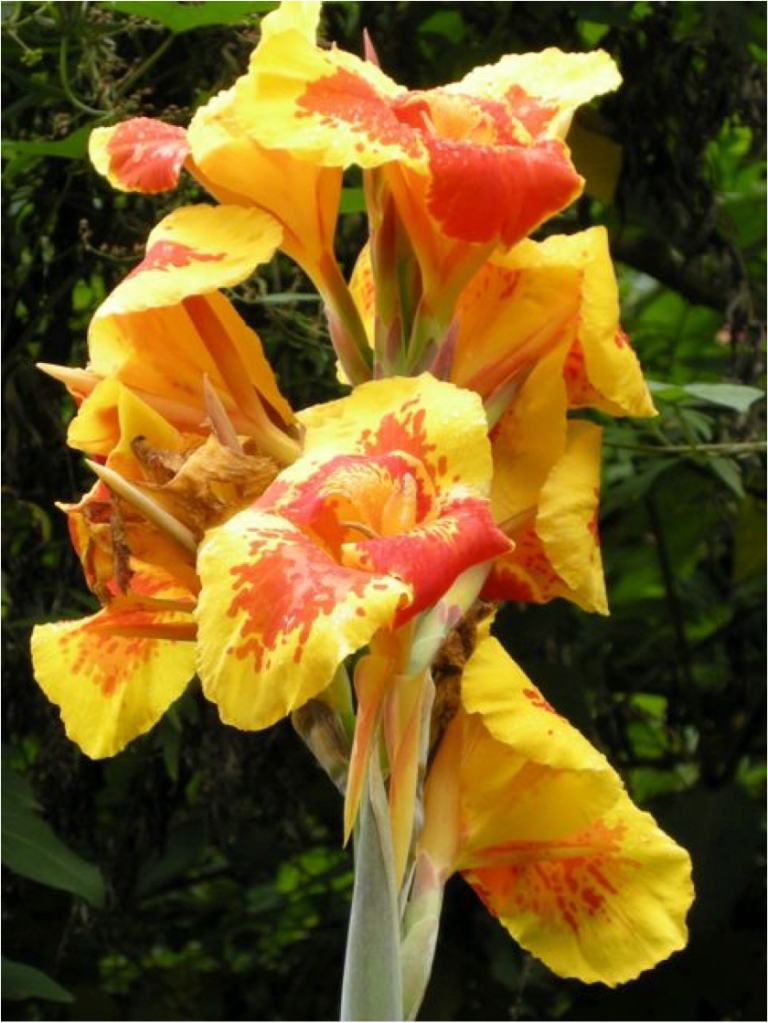 These cows are SO much happier then the ones in Mumbai and Madurai!

That means that everything is lush, vibrant, green, and fresh! And while “clean” is not exactly a word that applies to India – it’s MUCH cleaner here than the cities!  The trash that litters almost every inch of India has been in every photograph and video I’ve taken – impossible to miss. I was on a sunset cruise one evening with about 20 people – all from various parts of India – and one incident just drove it home to me.  A woman took out a package of gum and handed out pieces to about 4 other adults.  They all simultaneously tore the wrappers off of their gum then threw the wrapper over the side of the boat and into the water!  Another adult dropped his water bottle into the water when he was finished with it.  I cringed as I watched this but no one else on the boat thought anything of it.

They need to get the “American Indian” commercial here – you remember the one – where the indian is standing on the hill overlooking the littered ground and a single tear falls down his cheek?  Wasn’t that what started our “Keep America Clean” campaign?  Well, whatever it was – it worked.  They need a similar campaign in India.  Though I’m sure that there are some infrastructure issues to be solved first – like garbage collection. Still haven’t seen a garbage truck.

But I digress. We continue our way up the mountains to The Windermere Estate – my home for the next couple of days.  The road continued to twist like a snake the whole way up and Baskar’s proclivity for passing other vehicles and in general driving like the devil was on our tail – kept me off of the laptop for fear of getting carsick.  I put my headphones in my ears, braced each foot against a door, placed each hand on either side of me, and tried to stay upright for the rest of the trip.

We are in Munnar which literally means three rivers. Fed by three mountain streams, the Muthipuzha, Nallathani and the Kundala, Munnar is blessed with almost every shade of green that the mind can conjure and like I indicated earlier – the weather was delightfully cool after the heat of the cities.

Munnar is one of  the most popular hill stations in India located 5100 feet above sea level.  This was apparently where the British Government employees took their vacations while serving in India and I can see why. We’ve been passing sprawling tea plantations and quaint villages along the way and the road is actually quite nice – though still a little narrow for my taste – especially as the fog began to creep down the mountain.  We passed buses along the way that you couldn’t have paid me to get on. I thought the road was bad in our little Toyota – Thank God I’m not on a bus!

These kids are selling fruits and vegetables by the roadside.

This is tea factory…those bushes are tea plants.  They cover the hills.

All of the green areas are covered by tea plants. 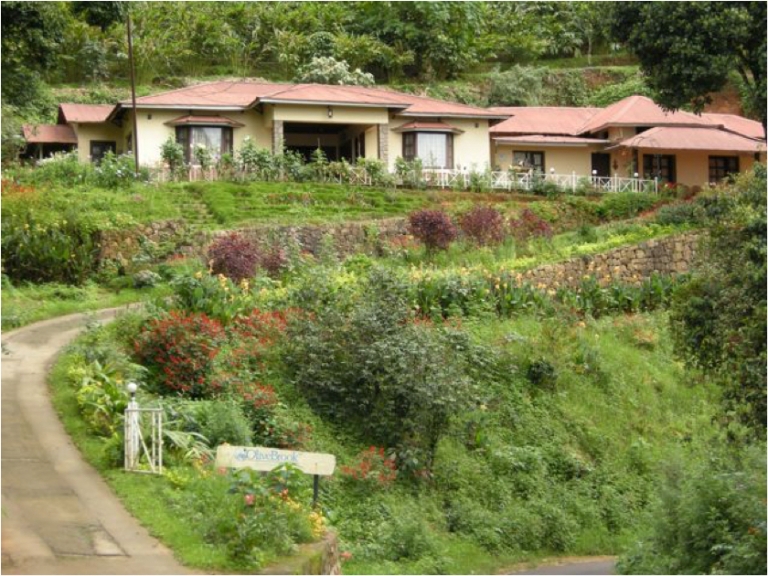 I thought I’d share a little information about India’s tea with you because it’s such an important element of their culture…and I’m in tea country!  Not only does India produce the most tea in the world, it grows some of the very best.

Nearly every part of the country has a tea-growing region and over 14,000 tea estates.  Approximately 4% of the national income of India comes from its tea. Other key crops include coconut, coffee, rubber, cashews, and spices.

The geography of India allows for many different climatic conditions, and the resulting teas can be dramatically different from each other. There are 3 main kinds of tea produced in India:

Assam
Assam tea comes from the heavily forested north eastern section of the country. They describe the tea from here as “rich and full-bodied.” It was in Assam that the first tea estate was established, in 1837.

Darjeeling
The Darjeeling region is cool and wet, and tucked in the foothills of the Himalayans. The tea is “exquisite and delicately flavored”, and considered to be one of the finest teas in the world.

Nilgiri
This tea comes from an even higher part of  India (where I am now) and has elevations between 3,200 and 8,200 feet. The flavors of Nilgiri teas are subtle and rather gentle. They are frequently blended with other, more robust teas.

Besides the different kinds of tea that come from India, there is also a very unique style of making tea. It’s called chai (pronounced with a long i like tie). While I’m sure that many of you are already familiar with this…I was a newbie when it came to Chai.

There are variety or recipes to make chai, but the basic ingredients are: black tea, milk, sugar, and spices. It’s the combination of spices that make chai so wonderful. The most common are cardamom, ginger, cloves, cinnamon and even pepper.  If you’re tired of plain tea, give chai a try…I did and I’m hooked!

I arrived at The Windermere Estate in one piece and was soon settled into my little bungalow overlooking the mountain.

The first thing I noticed was that I couldn’t see anything past the railing on my balcony.  Very cool.

The next thing I noticed was that the toilet didn’t flush.  Not so cool.  It went downhill from there…

At first it was just a few things…several light bulbs needed to be changed…then the hot water kettle needed to be replaced…the in room fridge didn’t work… my first meal request got confused…you get the picture.  It was one thing after another for the whole 3 days!

The first night I turned on the shower around 7:30 and no water came out of the shower head. Three maintenance men arrived around 8 and after an hour of head scratching and traipsing in and out of my room…it was decided that I would change rooms.  But the maintenance men didn’t have enough english to tell me what they were planning — they just started picking all of my stuff up and walking out the door with it. What the….

I quickly followed and soon figured out what they were doing – but there was a moment….

It was almost 10:00 at night by the time this was all over and so I bagged the shower in favor of bed.  At 6:30 am I was up and looking forward to that shower.  Well, there was water alright, but none of it was hot.  The nice folks at the estate don’t come to work until 7:30 and Baskar and I were headed out at 8 am for some sightseeing, so the shower was put on hold again.

I returned later in the afternoon and everything with the shower eventually got worked out but I was reminded of a family vacation taken many, many years ago in the Virgin Islands.  The island cottages where my family stayed inspired the phrase “if it can break…it will”.  By the time a new refrigerator had to be installed…it was just funny and the adults kept bringing up a book called Don’t Stop the Carnival by Herman Wouk.  All of us kids were too young to care about broken toilets and refrigerators and I think mice…but I do remember that book and how our parents handled all the mishaps with a cocktail and a laugh. That was probably where I learned to go with the flow when it came to travel challenges.  If you travel…something will go wrong at some point…being able to laugh about it is what makes or breaks you!  🙂

I toured a tea museum, yelled “Whoo Hoo” in an echo canyon with a 100 other tourists and walked through the small town of Munnar.

Me and Baskar at echo valley.  I thought he was going to have a heart attack first and then crawl under a rock when I started whoo hoooing at the top of my lungs to hear the echo! 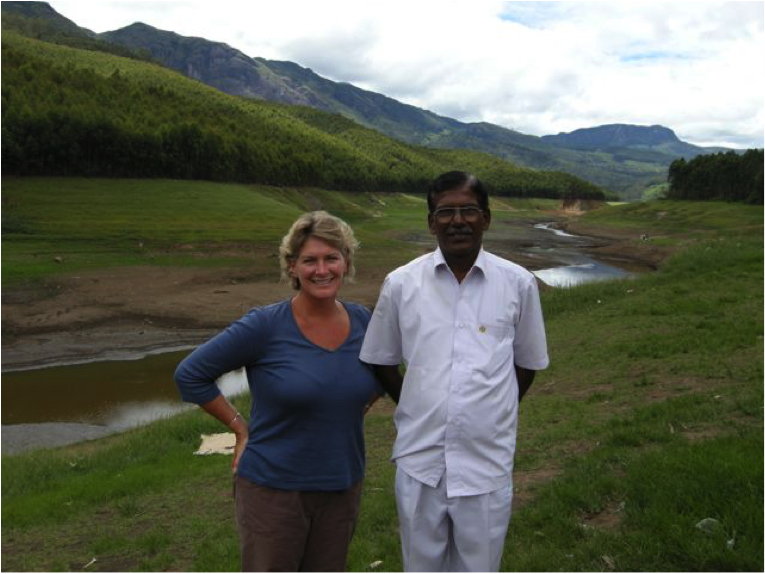 Eravikuloam National Park was next on our schedule.  The park is 60 sq miles with a high altitude of 8900 feet.  Baskar pulled the car over to the side of the road and pointed me in the direction of a building with a window and a man selling entrance tickets to the park.  I walked over to the window and bought my ticket then turned to see how I would be getting to the park.

It would seem that while “you couldn’t pay me to get onto one of those buses” – I would pay to get on one.  Crap.

The drive up the mountain to the entrance and back down again are two journeys that I would just rather forget…so let’s move on.

I enjoyed the walk through the park.  The views were spectacular and I was the most popular person there!  Everyone wanted a picture taken with the American.  And they weren’t shy.

Oh yea..that guys hand is on my butt.

The guy on the left (in purple) asked me if he could listen to what I was listening to on my ipod so I let him listen for a minute.  It was King Herod’s Song sung by Alice Cooper from Jesus Christ Superstar.  I told them it was an American christian religious song…

He looked very confused when he handed my headphones back to me. I have a weird sense of humor.

How cute is she!  Her mom was determined to get a good picture with the three of us…it took a few attempts. 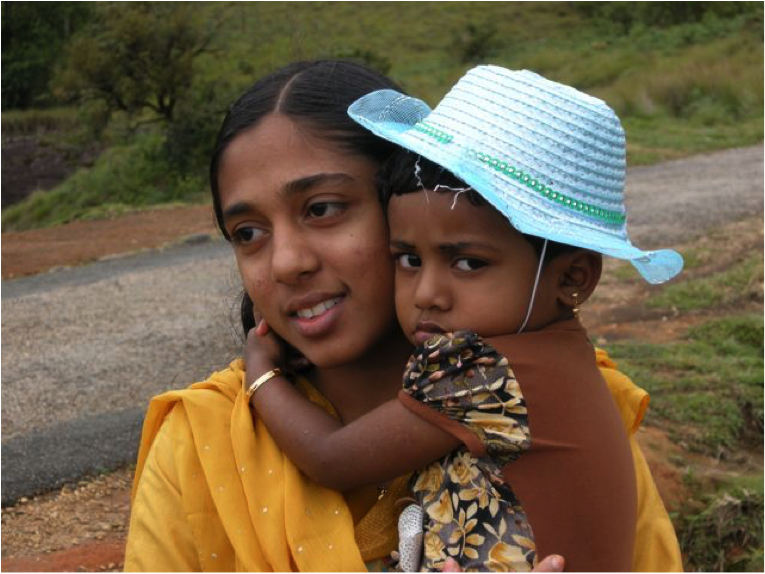 Back “home”, I was asked if I’d like to take a tour of the estate?  Sure.  I changed into some sneakers and headed out with a young man, Senthil, to see the plantation from the ground level instead from inside a speeding car…

The plants in the foreground are cardamom plants…the third most exported spice out of India and one of the spices used in chai tea. 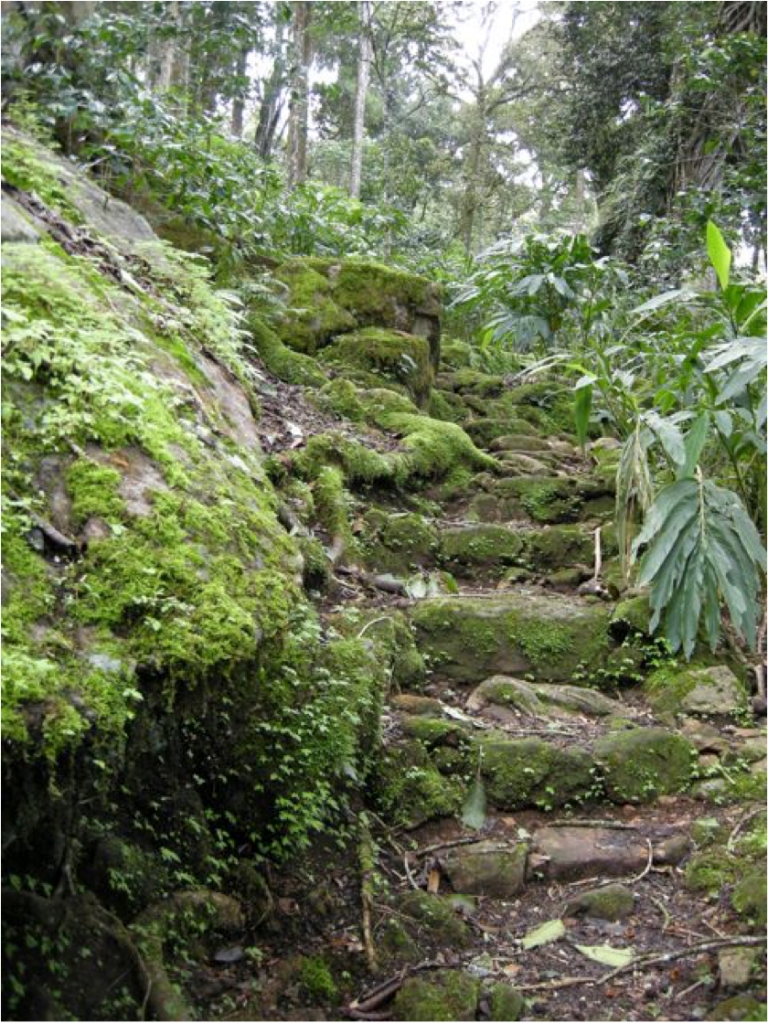 I met another traveler while at the Estate – Cerys – a woman about my age from the UK.  We had dinner together (sort of) one evening and talked and talked and talked.  I hadn’t had a real conversation with another person who spoke english well, since leaving Dubai and I was low on my chatting quota.  This made up for it!  I just wish we had had some wine — we never would have stopped talking!

On Tuesday morning I said goodbye to the Windermere Estate and the hill country.  I’m heading down to sea level and the backwaters of India.  I realize that going down only means that Baskar can drive faster – but I’m prepared for this – I’ve taken a valium.  Drive on Baskar!