I knew nothing about Kathmandu before coming here…except it was the place where people took off from on their journey to climb Mount Everest. It’s the capital of Nepal, the gateway to tourism here and it’s an exciting city that is expanding in response to the huge influx of tourists from around the world. There are a large number of restaurants featuring various cuisines, museums, concerts and cinemas featuring both Hollywood AND Bollywood films. After my visit to the Monkey Temple, I spent the remainder of the day exploring the city. First stop – Durbar Square. 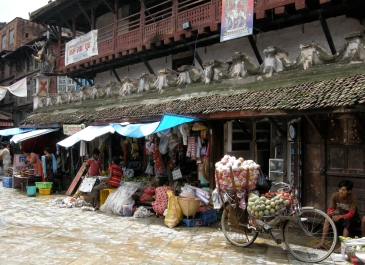 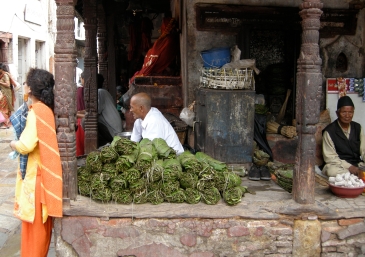 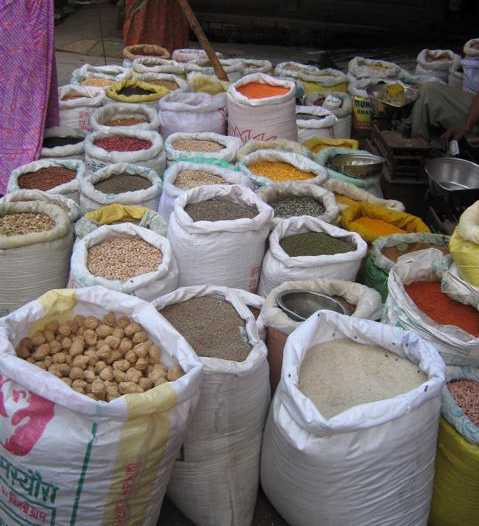 You can purchase a bucket of pigeon food and then go into the square there and feed them.  There are three cows that just hang out with the birds.  Any sudden moves and they all fly up in the air at once. I kept thinking that one of them would you know what on my head…so I kept my distance.

I really enjoyed the architecture of many of their buildings. Below is an apartment building. 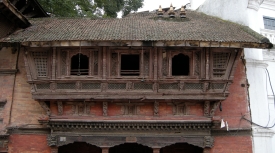 Check out the detail on these windows – wow. 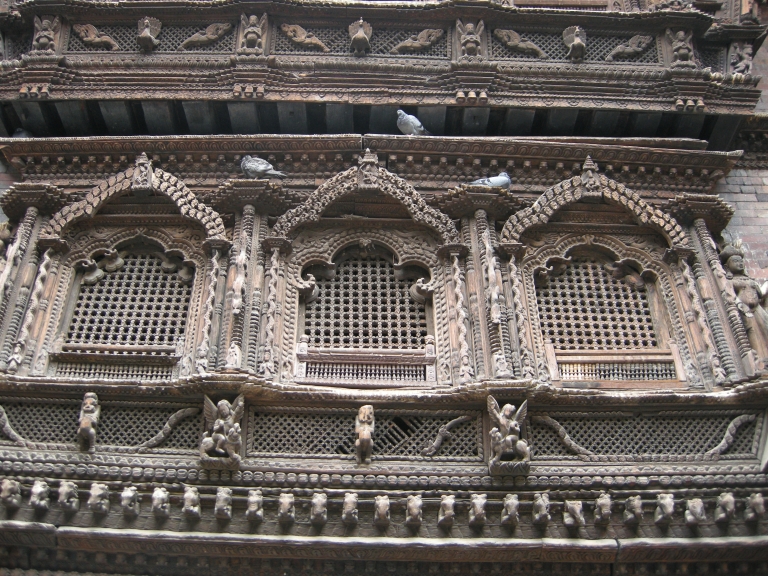 As we’re strolling through the city, my driver/guide Mono, shared his opinion about politics in his city. He gave me the full rundown of the history of Nepal in an hour and then we spent the rest of the day talking about the fears of his people.

“Supposedly” being the operative word here. They don’t really stop them so many illegal things are taking place every day and the people are all very scared.  They have been having a particularly bad time with the kidnapping of children of the wealthy and foreigners.

Now, I’m sitting in the back seat nodding my head in sympathy and making all the right sounds of concern and empathy…all the while thinking…I’m never going to see US soil again.

Then he asks me if the company has my emergency contact information?  WTF?

I got out one of my “information” cards and wrote my parents contact numbers on it and gave it to him…just in case he says. I won’t sleep again tonight.

This is a “special tree”…and while you can’t cut it down…you can build a small temple around it.

Time to head out into the countryside. We drove an hour out of the city to Bhaktapur, home of medieval art and architecture of Nepal.  We took a lovely winding country road too…instead of the highway.  This is simply the best way to see the country!  You drive through small villages and towns…each one unique and charming.  We passed rice fields being harvested by women and children going off to school in their brightly colored uniforms.  Men and women alike were sitting inside small spaces selling their wares…just waiting for someone to stop and buy something.  Life in the country moves at a very slow pace… 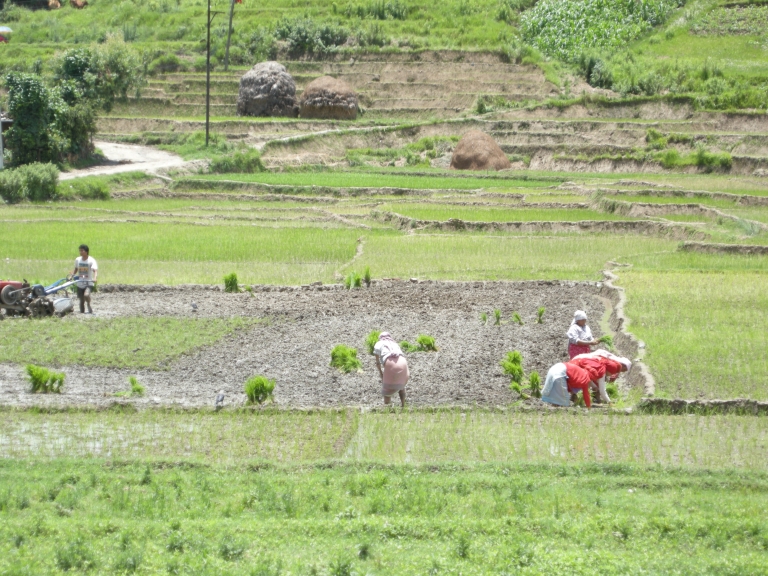 We stopped in a small town along the way for a walk…and some picture taking.

Mono told me that Nepal in very fortunate in that it has very good relationships with many other countries.  For example, the US provides much of the funding for developing clean water sources and China is funding the road and highway infrastructure.  I was glad to hear that Nepal has a happy relationship with the US.

Bhaktapur is the third largest city in Nepal and it was really nice to just walk through it — up and down it’s streets – just looking around at the architecture and the people.

Hanging garlic out to dry…hanging from poles outside of upper windows. 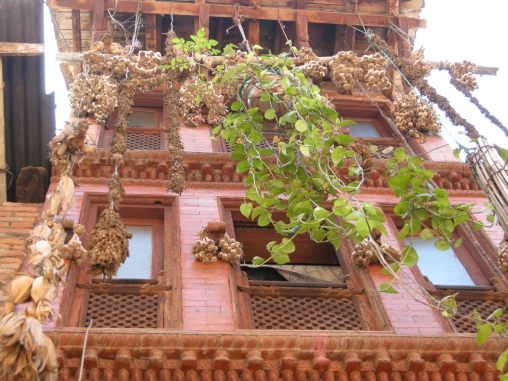 And some red chili peppers…. 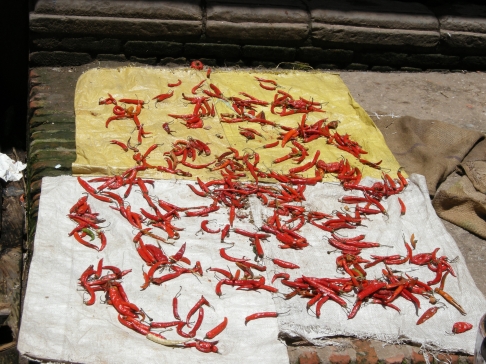 I’m going to have to pay attention to what’s in my lunch!  🙂 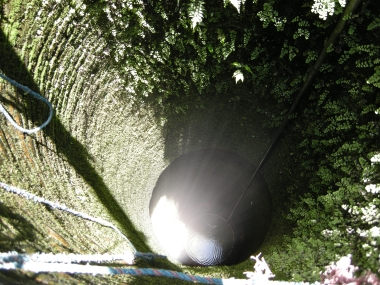 This shop was selling fish… 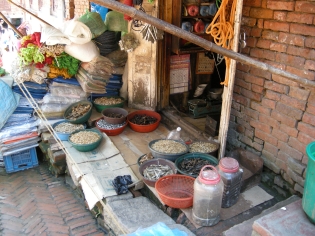 In the midst of cool temples, mosques and monasteries…I just love their windows!!! 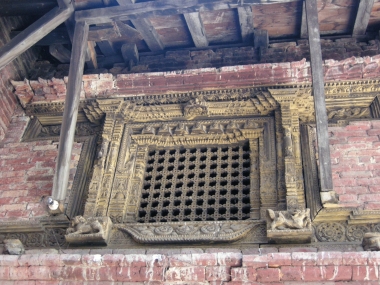 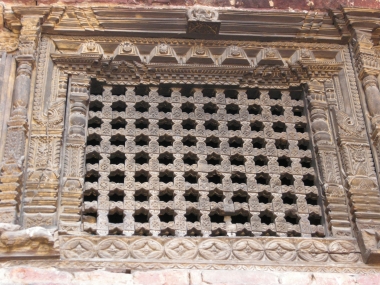 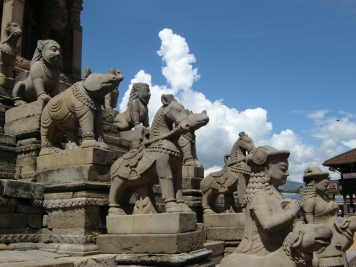 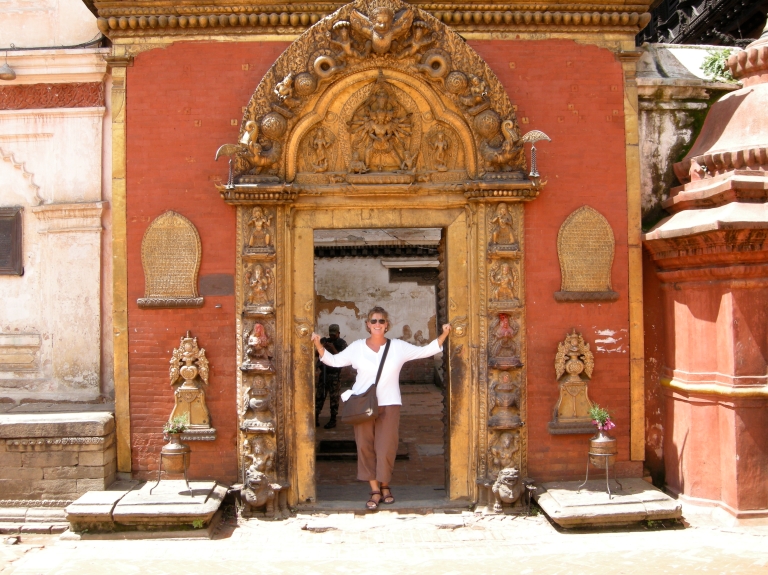 By now, it was about 4:00 in the afternoon and we headed for home back down that lovely little country road…as we still weren’t sure about the main roads.  It was a really great day and I think that as long as I can avoid being kidnapped…I’m really going to enjoy Nepal!