I’ve been here for two weeks and yet never asked myself the question “I wonder what they feed the lions?”I only just asked this question because this morning I woke up, went to see what my assignment would be for the day and instead of “walk lions 1, 2, and 3” the board read “FEED the lions”. This is what made me wonder what they ate. The answer is donkey.

So where do the donkeys come from? I’m told that donkeys can be purchased. That leads me to wonder if there’s a donkey farm where they breed donkey’s for lion chow or are these just donkeys that no one wants anymore. I stopped asking questions because I really didn’t want to know the answers.It seems that every 3-4 days a dead donkey shows up here and I’ve been fortunate enough not to have seen it before now. I’m hoping this is the last time.

It’s 7am and I’m headed out to this concrete block that I pass every day and which has just recently filled with donkey and goat parts. The guys are all standing around waiting for my arrival with machete’s and knives in their hands. Sigh…this is gonna be bad.

I have to admit that while I was walking towards them, I wondered if I would be asked to participate in the chopping up of the donkey. This is a very hands on – participative volunteer experience to date and frankly it seemed as though I would soon be pulling on a pair of rubber gloves and wielding a machete. I was thinking to myself that I might have to decline this job…unsure if I’d be able to do this or not. Fortunately, I just had to oversee the process.

The goal is to divide the donkey – and whatever else is being served – into 6 equal parts for the bigger cubs and then two smaller sections for Rundi and Rusha (the two middle cubs). 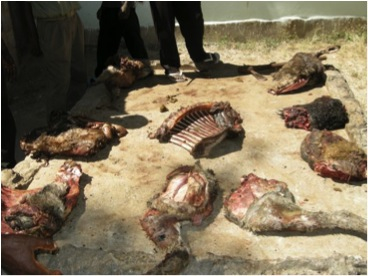 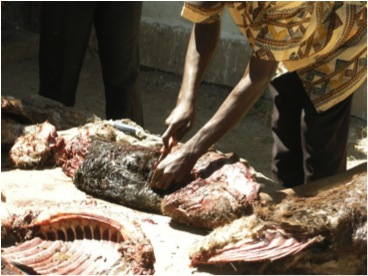 This batch obviously includes both a donkey and a goat. Can you say – The GODFATHER?!

I watched as they cut everything up – there were flies everywhere – and lots of blood and guts. It didn’t seem to bother the guys – I guess you get used to it. It didn’t smell good  – you may guessed that by now. I saw more of the inside of a donkey than I’ve ever wanted to. And we’re off to the large lion enclosure.

In order to get the meat into the enclosure without getting bitten, several of the guys go in first and herd the lions to the back of the enclosure and hold them there to give the others time to unload the truck. While this is happening, the lions are letting out low growls and pacing in anticipation of feeding. Once the meat is separated and the men have left the enclosure -it’s a free for all. The lions tear into the meat and before long – almost everything is gone.

I say almost because the next day the board read “clean lion enclosure“.

Alex and I had to remove the left-overs and this was GROSS, GROSS and GROSS!!!! I had to take a wheel-barrow in and a shovel – so did Alex – and we walked throughout the enclosure picking up bones, tails, hoofs and skulls.

And that’s the rest of what they didn’t eat…yuk. 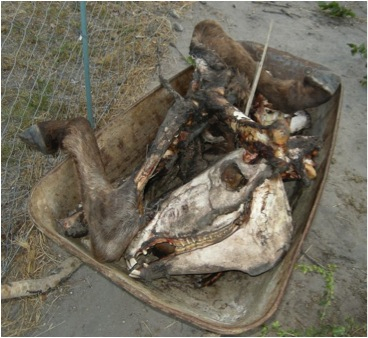 To make matters worst – what went in also came out and the stink was almost too much. OMG. Did you know that lions only defecate immediately after they eat? Notice the head is licked clean and the only thing left from the inside of the donkey are the ribs. 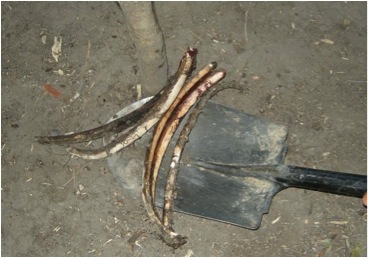 And if all of this wasn’t bad enough – the stuff put into the wheelbarrow also contained maggots, flies and ants. This is not a pretty job. But the lions are fed and this means I’m not prey…so bring on the donkeys and a wheelbarrow!